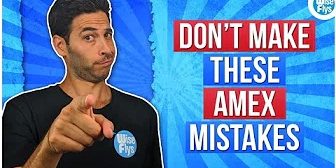 Along with other banks and loyalty programs, American Express membership rewards are constantly changing their system. It is really important you stay in the know and don’t make any of these mistakes. Here are the Five common mistakes people make with American Express credit cards and points.

You Only Get the Sign-Up Bonus Once Per Card, Per Lifetime

It’s the same with the Hilton cards. You could get the No Annual Fee Hilton Honors card sign-up bonus, the Hilton Surpass sign-up bonus and the Hilton Aspire sign-up bonus. Definitely make your application count when you’re applying for the American Express card.

For example, the Blue Cash Preferred card gives you cashback, the Delta Gold card gives you Delta SkyMiles. There are quite a few options and it’s important to know the difference between each American Express card.

Not Knowing the Difference Between Amex Charge Card and Credit Card

Next, is not knowing the difference between the Amex Charge card and Credit cards. Credit cards have a fixed spending limit and you don’t have to pay your balance in full every single month. However, I highly recommend you do pay your bill in full every single month and do not accrue any interest. Any interest you do end up accumulating negates any points you’re earning.

With a Charge card, you have to pay your balance in full every single month and there is no way you could carry a balance.

You should be paying your bill in full every month with every single credit card so with a Charge card there is no way you could carry over that balance.

Not Knowing All of the Amex Transfer Partners

There are many different transfer partners as well as different ratios for each airline you will transfer to. The transfer times are different as well; sometimes it transfers instantly or it could take a few days.

Another tip, transferring to hotels rarely makes sense. You are better off using the transfer to airlines. It is really hard to get good value out of Hilton, Choice Hotels, and Marriott. It’s also important to note when you transfer to partners that are US airlines, there is a .06 cent per point that you transfer. For example, if you were to transfer your MR points over to Delta, for every point, it would be .06 cents, which adds up when you’re transferring over thousands of points.

Also, keep in mind, all transfers are final. You cannot transfer to an airline and then want your MR points back and bring it back into your American Express account. You always want to make sure it is always available and you have plans for the airline that you’re transferring to before transferring because once you transfer, there is no way to get it back.

Not Making The Best Use of Spending Categories with Amex Card

For example, you could use the American Express Gold card at supermarkets and get four points per dollar. If you have the American Express Platinum card and you’re not using it for airfare or hotels, then it doesn’t really make sense to go to restaurants, pay for gas, or other spending categories you normally do on a regular basis because you’re only going to get one point per dollar with the Platinum Card.

The big mistake a lot of people make is they want to earn as many points as possible and they use their card for every single purchase, but if you’re only getting one point per dollar for that purchase, you are losing because there are many cards that will offer you higher earning potentials for your regular purchases. You should always strive to get more than one point per dollar on all of the purchases you make.

By making any of these mistakes, it could cost you hundreds of dollars. A bonus tip, a lot of people let their credits expire. For example, the American Express Gold card and the Platinum card offer a bunch of credits throughout the year. The Platinum card gives an Uber credit of $200 for the year but it’s $15 every single month and if you don’t use that credit, it will expire and it does not roll over into the next month. Another example is the Saks 5th credit which is $50 for every six months. With the Gold credit, you have to use the Grub Hub, Steak and Shake or whatever the restaurant food credit is. You want to make sure you are using those credits before they expire.

5 BEST Ways to Use AMEX Points with Transfer Partners
August 29, 2019