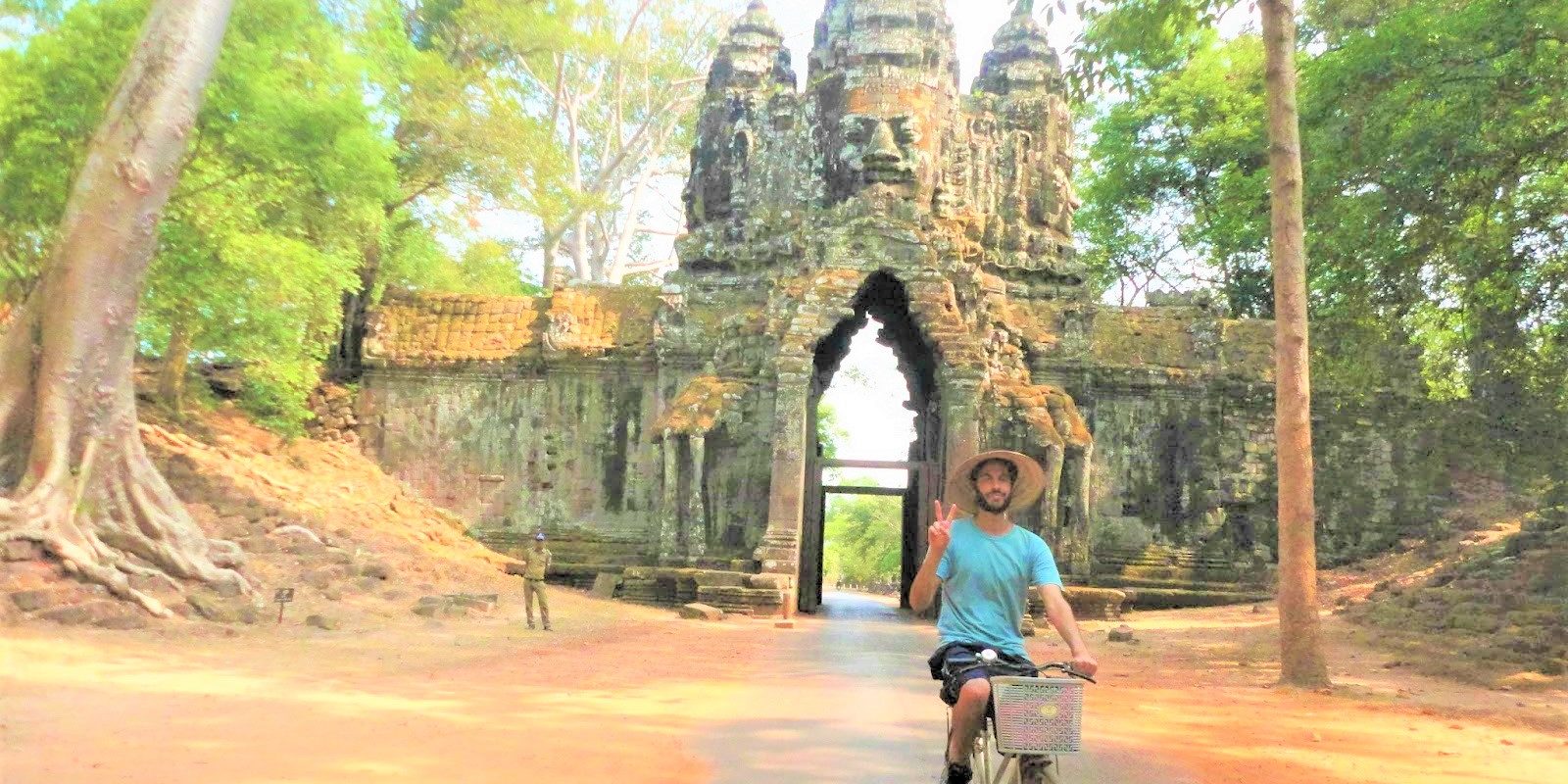 Within an 40 minutes of landing in Phnom Penh from Australia, I was walking up the stairs of my hosts house. Chakara was 23 years old and worked at a law firm.. Compared to most Cambodians, Chakara was muscular because of his devotion to the gym and stylish due to his collection of fashion magazines. He took pride in his appearance and wore clothes that resembled a flamboyant European.

I placed my bag down next to the cot I was going to sleep on and took a seat. Chakara introduced me to Morgan, a Chinese American girl that was couch surfing as well.

Within thirty seconds of sitting down,Chakara asked, “Do you want to go to a bar and meet with some friends?”

“Sure” I said thinking he meant later that night.

“Ok, let’s go now.” He said and motioned me to follow him.

“Uhh..Ok” I said with an attitude of going with the flow.

I hadn’t even gone to the bathroom or showered. We got in his car and drove five minutes through the busy streets of the capital. It was nighttime and there were food vendors on every corner with many people strolling through the well lit sidewalks. The building we parked next to was the largest in the city. As we arrived on the rooftop bar, we were greeted by a table of Chakaras friends. It was about eight of us from all over the world. Everybody was in their early twenties and had different reasons for being in the city. A french and Canadian girl were volunteering for the government for a year. A girl from Vietnam was visiting for the day. A Swedish girl was working for 3 months and then fell in love with a local and wound living there for a year.

The bar was the most exclusive in the city and I can tell by the drink menu. Each drink was $15 or more. I couldnt believe it, Cambodia was supposed to be one of the cheapest countries in Southeast Asia. I decided not to get anything, $15 was three hours of massages which was much more enjoyable. The view from the bars was magnificent. All the city can be seen because it was centrally located and the tallest. As our conversations went on through the night, I couldnt help notice the type of crowd at this bar. We were the only table of foreigners. Most of the tables had one overweight middle aged Cambodian man surrounded by 4-6 young Cambodian girls. The men sat back and drank with sunglasses on as the women smothered and caressed the big shots. 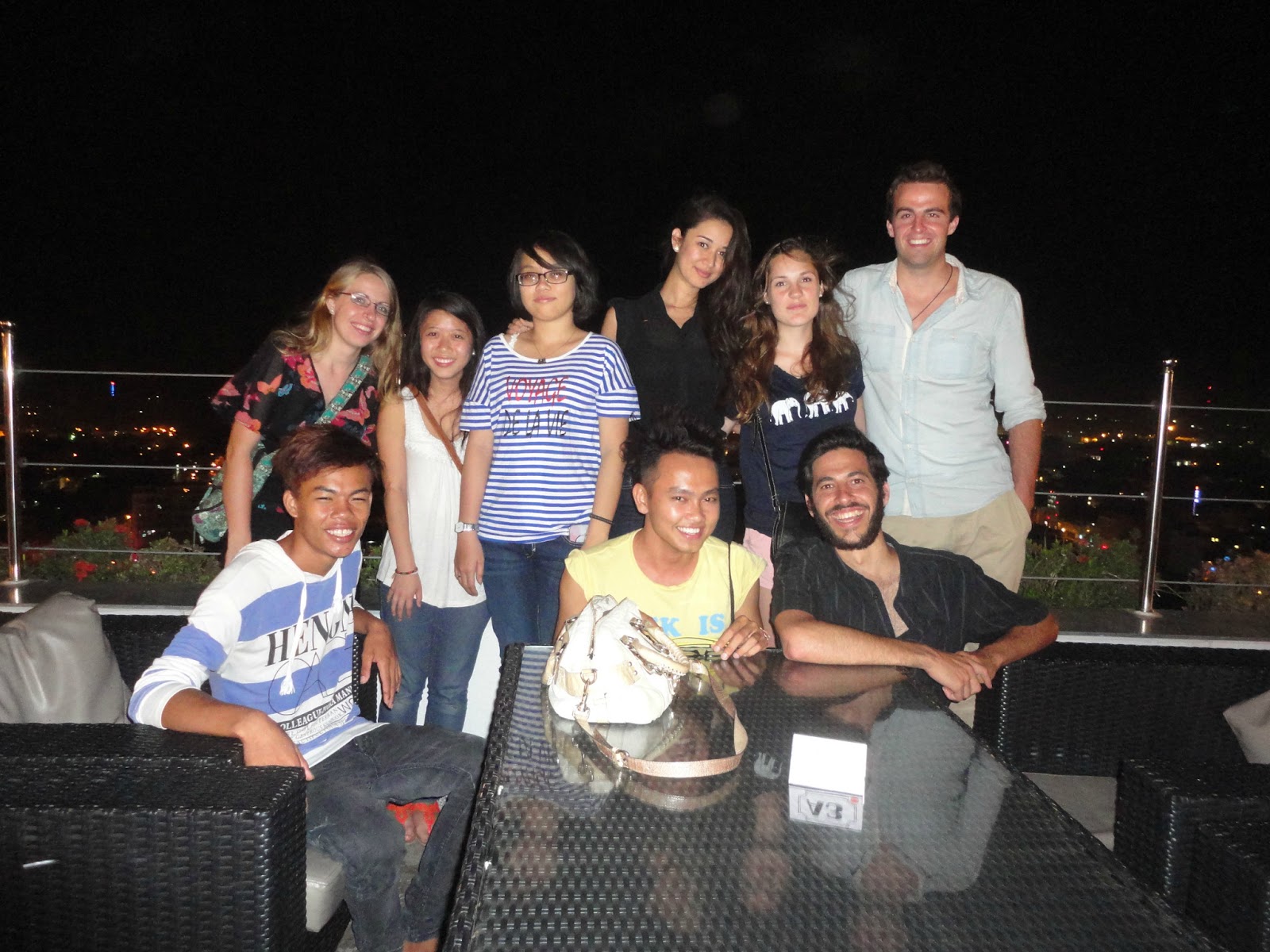 The next day Morgan and i explored the city together and saw most of the sites. We ate random food at the markets and visited the Royal palace. Morgan wanted to buy gifts for her family at the market, so i taught her how to bargain. Overall it was a fun day. 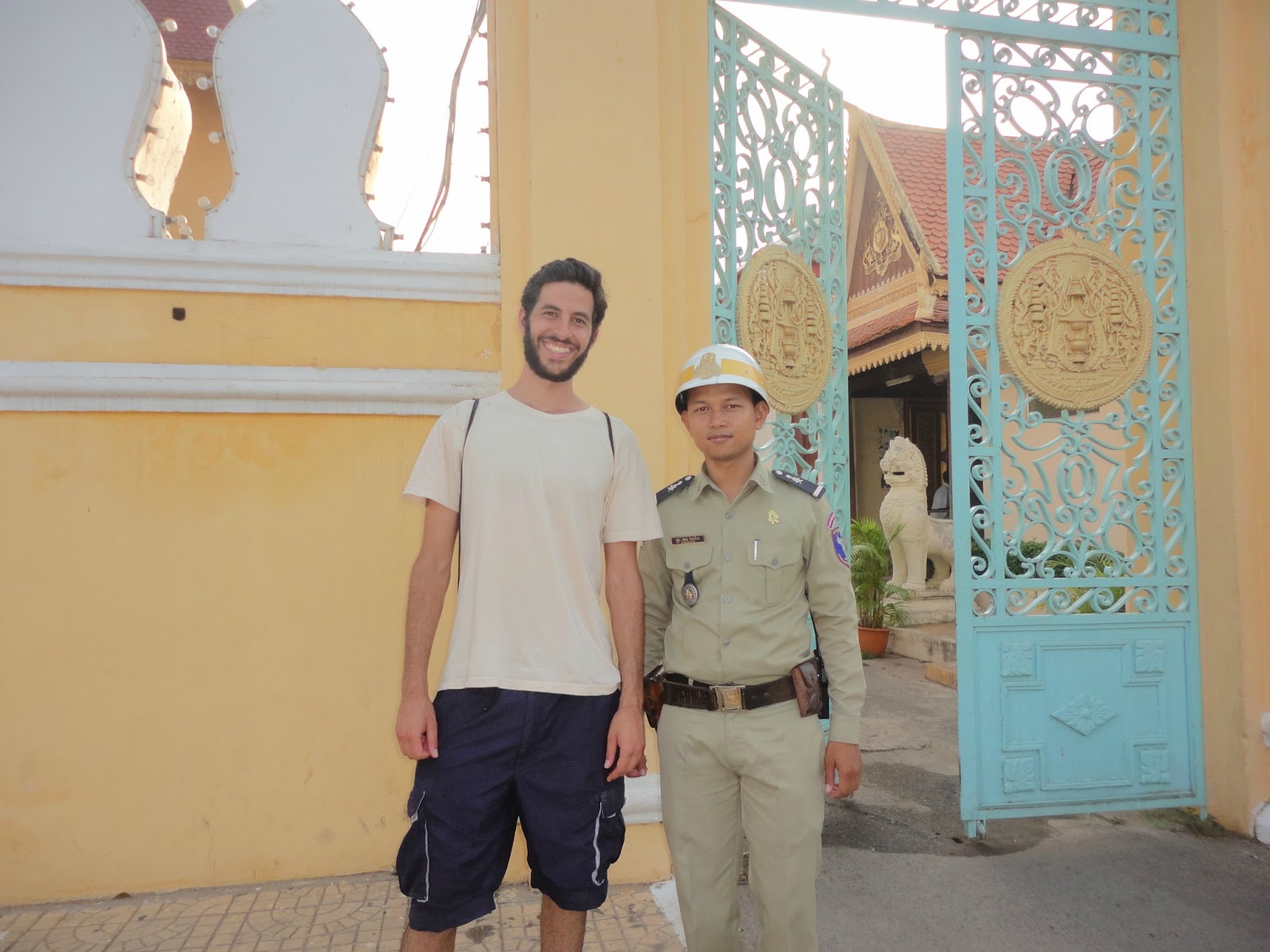 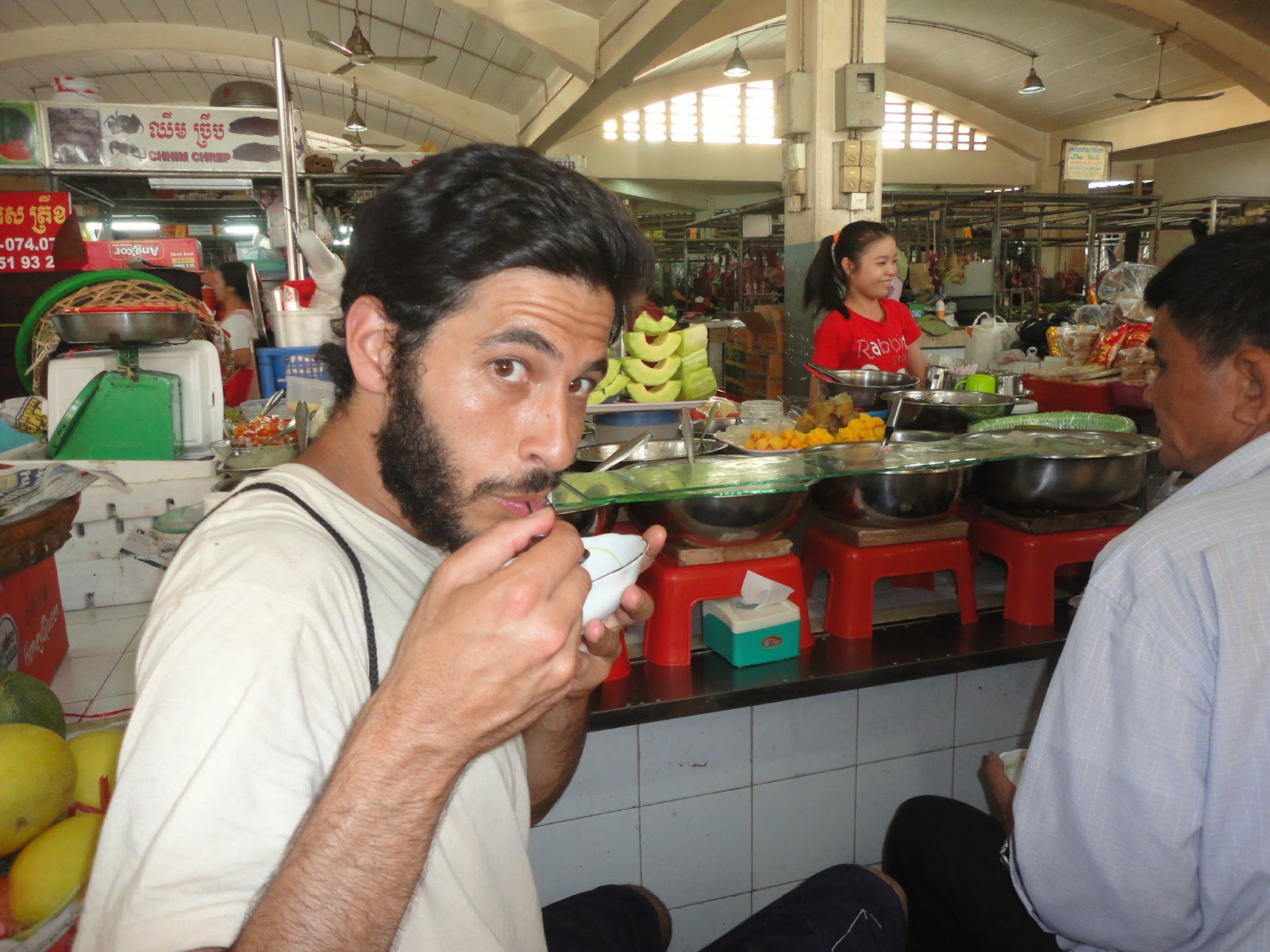 The next day I took a six hour bus to Siem Reap to visit a dream destination, Angkor Wat. Ever since I read about Angkor wat in National Geographic when i was 15, I have always wanted to visit. 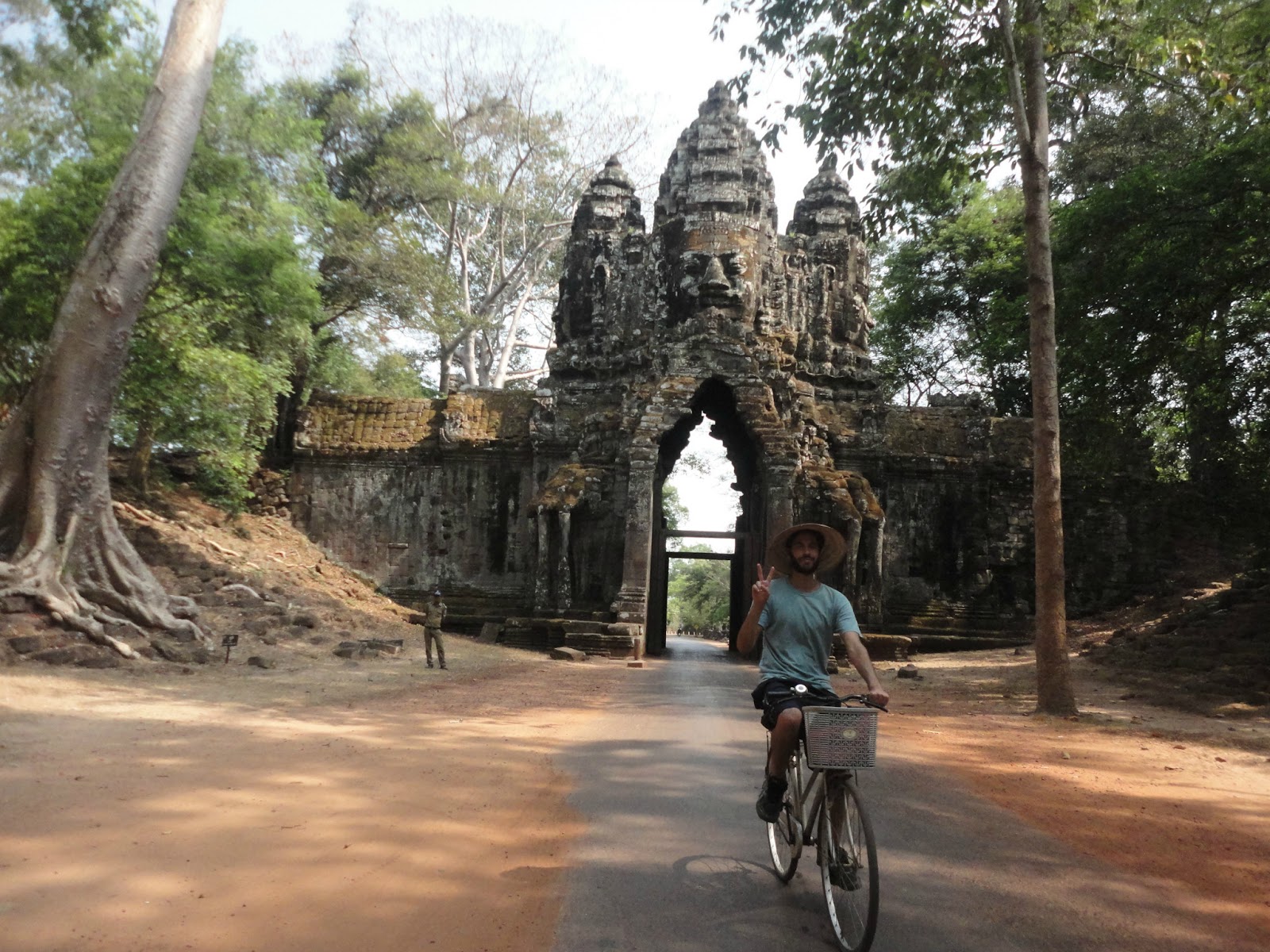 Angkor Wat was first a Hindu, later a Buddhist, temple complex in Cambodia and the largest religious monument in the world. It was built in the 12th century and had many advanced water systems. The history of the area always fascinated me and how it was able to stay intact.I decided to rent a bicycle from my hostel for $1 a day. It was a good deal but a crappy bike. I decided to make due and got used to it after a few miles. It turns out that the bar with $15 dollar drinks was just a fluke, everything was extremely cheap in Cambodia. My hostel cost $6 for a private bedroom and bathroom. A giant dish of coconut curry was $1.50 and a massages were at an all time low. 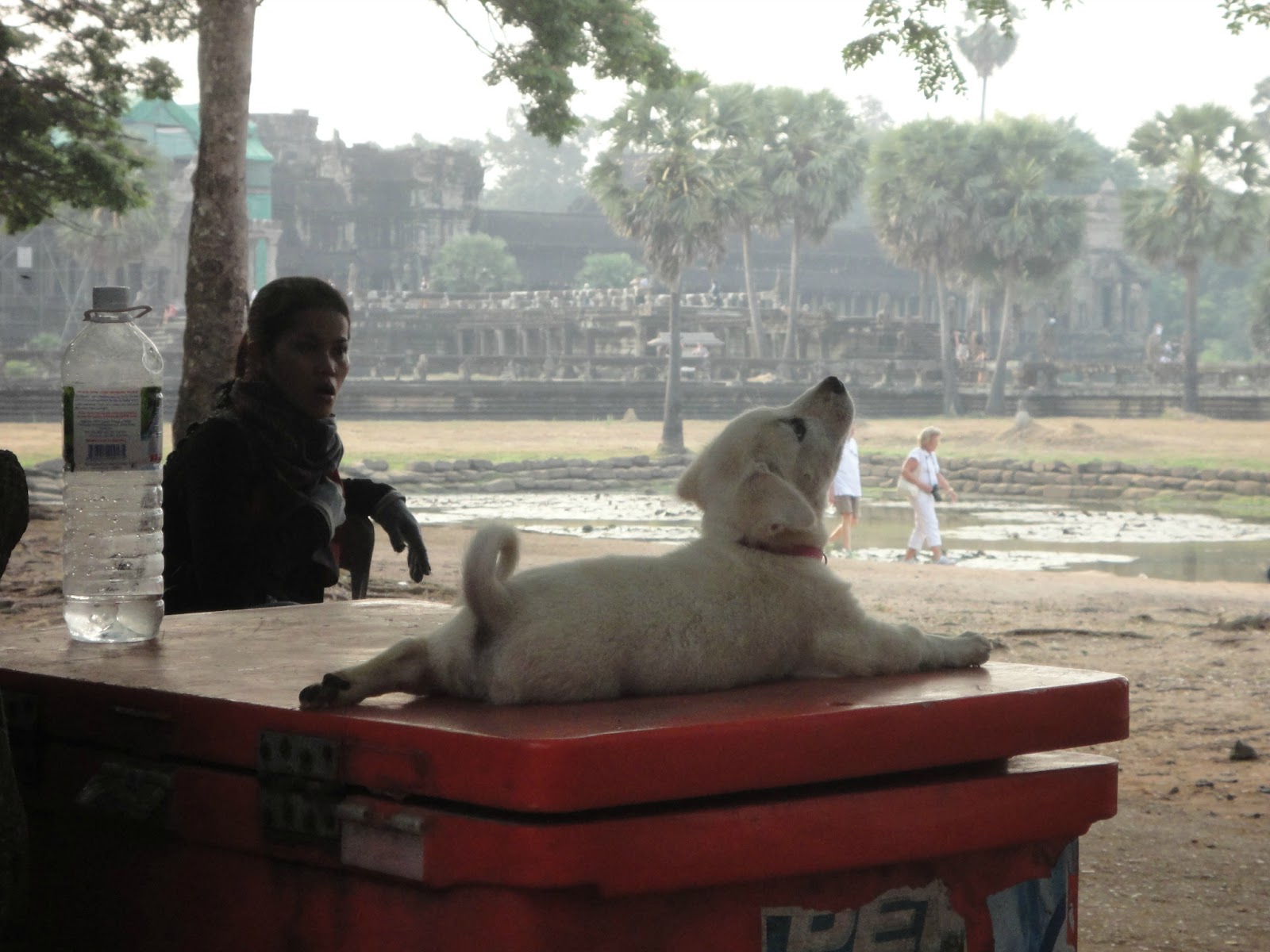 After a long day of biking, I binged on massages. I got a 1 hour thai massage for $7 and felt amazing after. As I was walking down the street, I saw a sign saying $1 massage. My curiosity was peaked and I had to get it. When I spoke to the woman/girl (they all look so young, it’s hard to tell their age) about the $1 massage, she said she will give me a thirty minute massage for $2. Cant beat that. After the 30 minute head, shoulder and arm massage, I was still curious about the $1 massage. There was another girl/woman holding a sign saying $1 massage and I approached her. She gave me a 10 minute foot massage on the street in a lazy boy recliner as people were walking by. It was surreal but well worth a dollar. For 100 minutes of massage, I only paid $10…I never wanted to leave.

My hostel manager said that I should go to see Angkor wat temple at sunrise. He said that I should leave the hostel at 430am and get their on time. The next morning I left at 430am and got their and hour before the gates even opened, I think he meant 530 am or I’m very fast on a bicycle. The workers of the entrance were just clocking in and wondering why I was there so early. While I was waiting, I let the cool night breeze dry up my morning sweat from the 3 mile ride. I was the first to arrive at the spot and got a seat on a rock front and center. Within minutes, people started filing in waiting for the same view. At the time of sunrise there was about 200 people sitting and standing shoulder to shoulder. Two guys were fighting because they each got in each other’s way when they were taking photos. An Australian guy made a scene and yelled that he was sick of taking pictures with the other guys head in every shot. 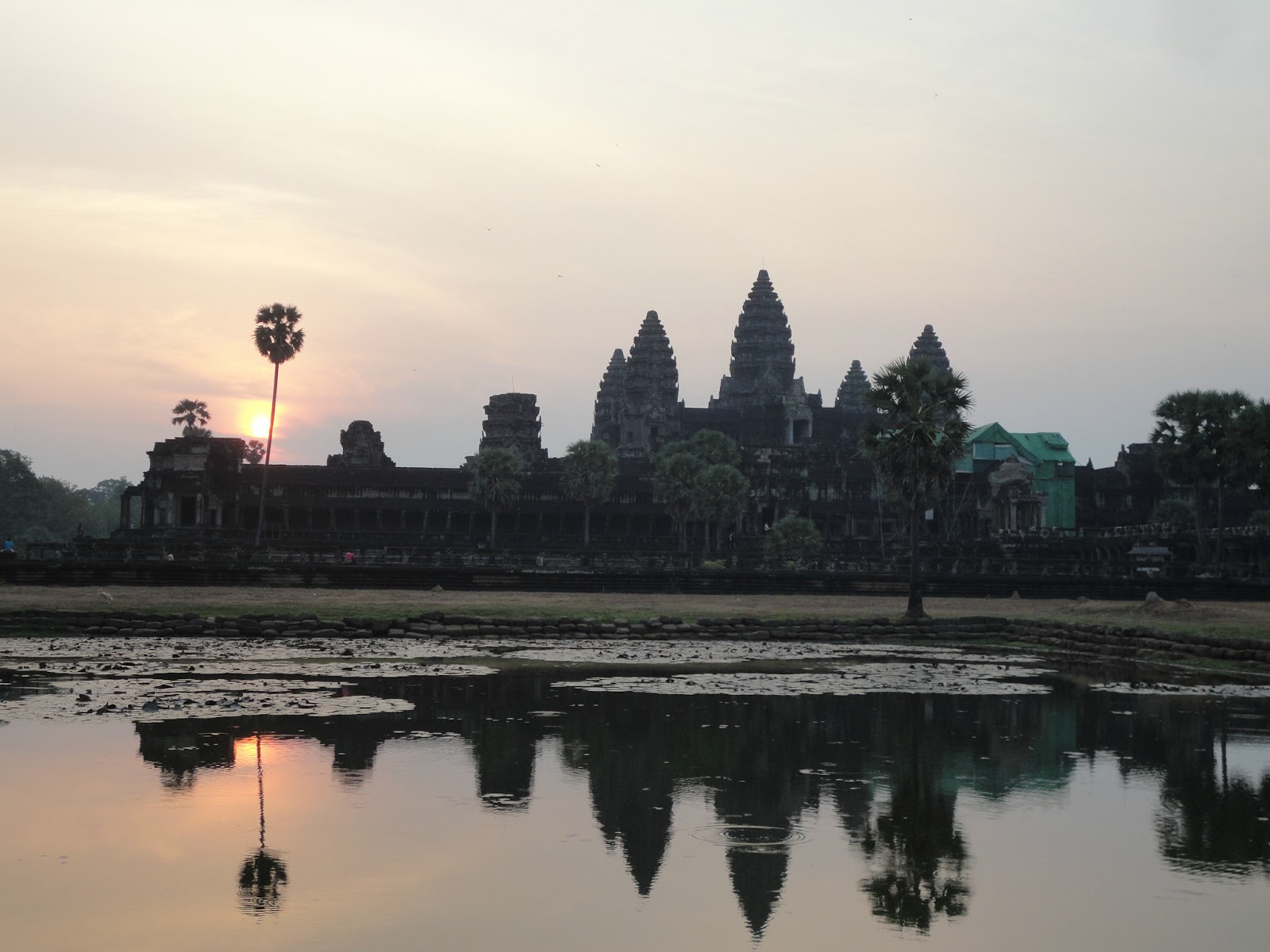 When sun was fully set, I ate some breakfast and started biking to visit all the temples. I had a blast riding from temple to temple and climbing the steps. The architecture was still in tact and Buddha faces were recognizable. Throughout the day, I drank about three gallons of water, 5 coconuts, and 3 sugar cane juices. The weird thing was that in the 105 degree arid climate, I only urinated once. My body needed so much fluid. I never once felt like I was going to faint; my body felt energized. At the end of the day I was sore but that’s what the cheap massages were for. 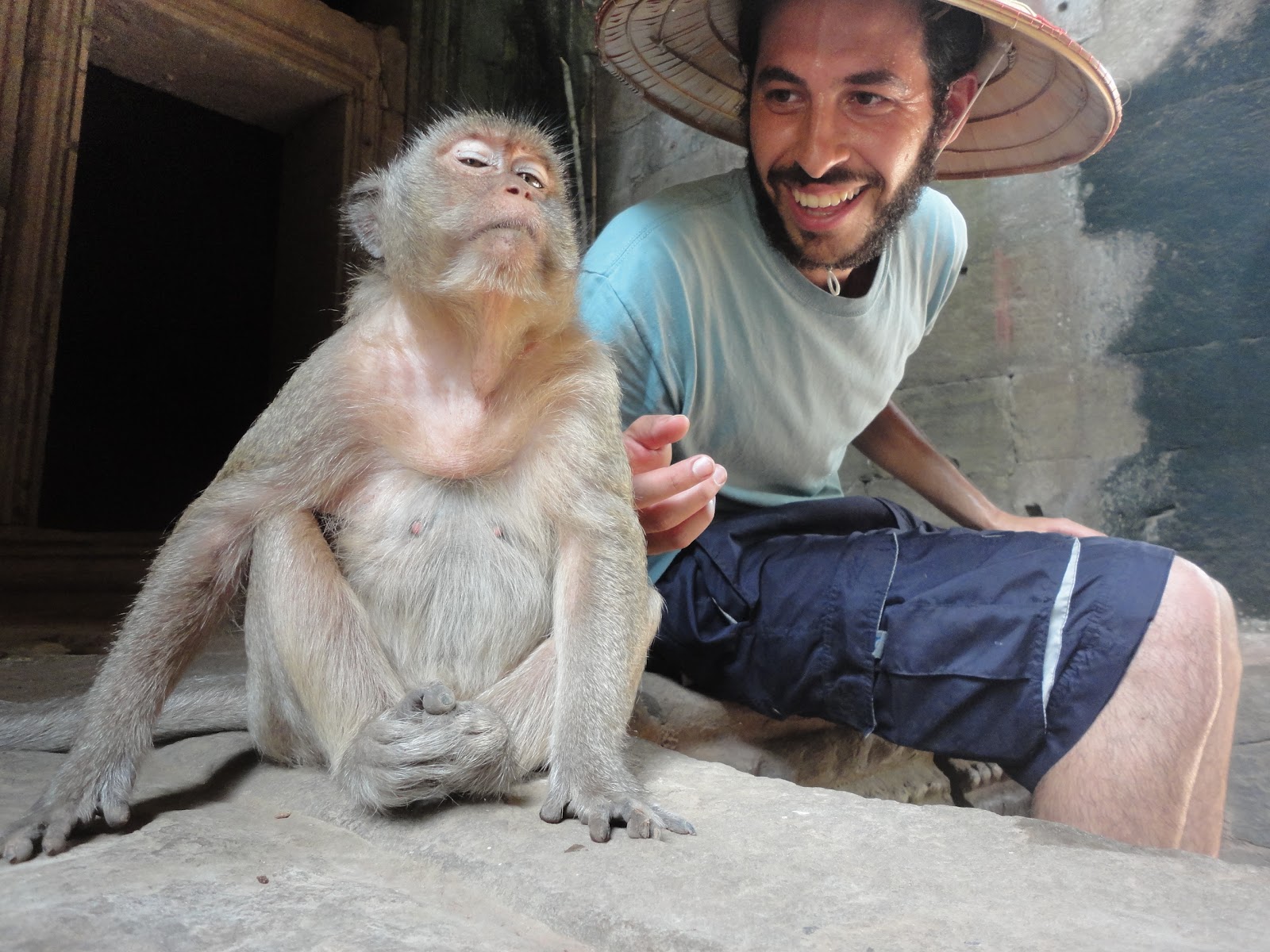 When I was riding my bike through at the entrance of of the main city, There were two guys taking a picture of a monkey up close. the monkey was sitting cross legged with its hands folded on his lap. His eyes were softly open and looked unamused with the two guys. They told me he was friendly and was just chilling and in a good mood. I parked my bike and observed the monkey. the funny thing was the meditating Buddha sculpture behind him. It was almost as if the monkey was meditating like the sculpture. Usually monkeys are more energetic but not this one. He seemed wise and gave us a condescending look as a teacher would to a misbehaved student. 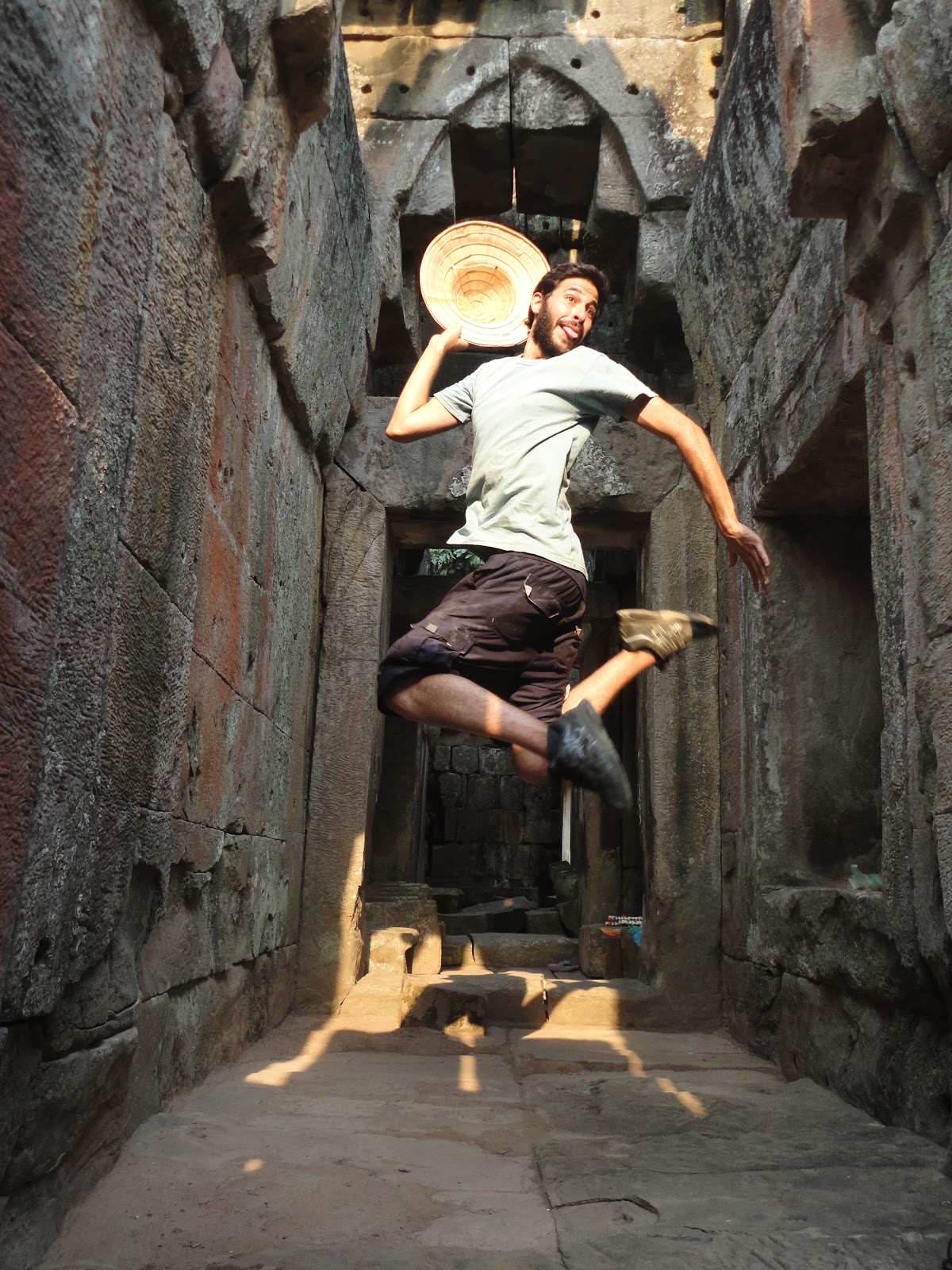 At one of the temples a 7 year old girl was selling magnets and soda. She kept asking me if I wanted to buy and I kept denying. I felt bad for her and started to talk to her. She was telling me how she doesn’t go to school and her mom makes her sell stuff so they can eat. She wanted to see my camera and take pictures. For about thirty minutes, I let her roam around the temple and take as many pictures as she liked. She was so happy and excited when she showed me a new favorite photo she took every five minutes. She then wanted me to pose for pictures and made me jump and make silly faces. The picture of me jumping took about twenty tries until she was happy. She was insistent that it come out perfect. After an hour of talking and playing, she invited me to her house and said her Mom can cook me dinner. It was a nice offer, but i don’t think her Mother would appreciate a sweaty American adult in her house brought by her daughter. Visiting all the temples and sites was a lot of fun but spending time with this sweet girl was the highlight for me. 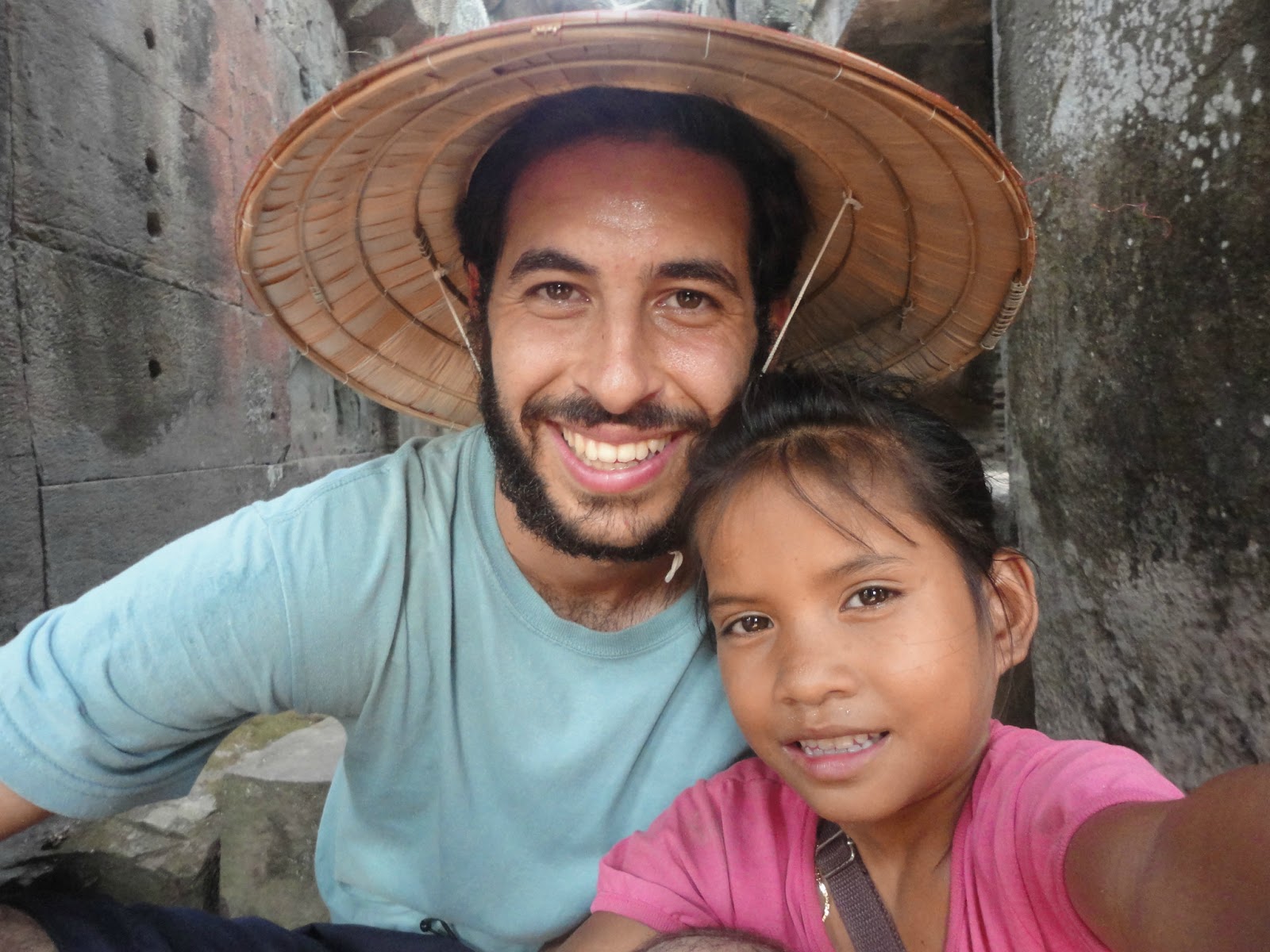 Another fascinating feature of Angkor Wat was the fusion of nature and stone structures. When the heavy stone structures were abandoned hundreds of years ago, giant fig trees started swallowing them up. These trees were massive and grew over every size building it could. The roots slithered through the cracks of the heavy stones like an anaconda snake. 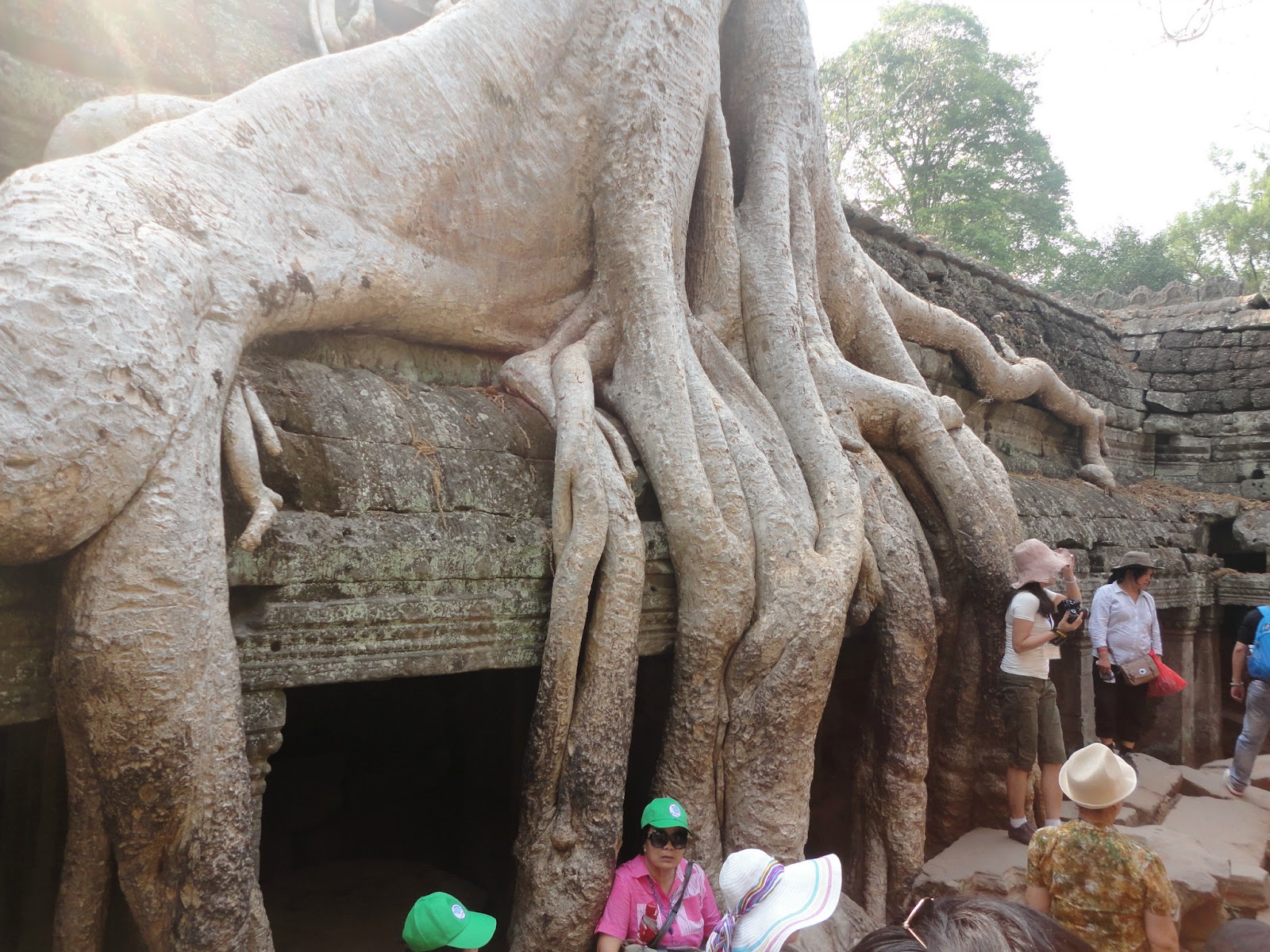 When there was no one around, I often climbed the trees onto the roofs and explored. It was fun scaling the stones and walking along the weathered roofs of temples. 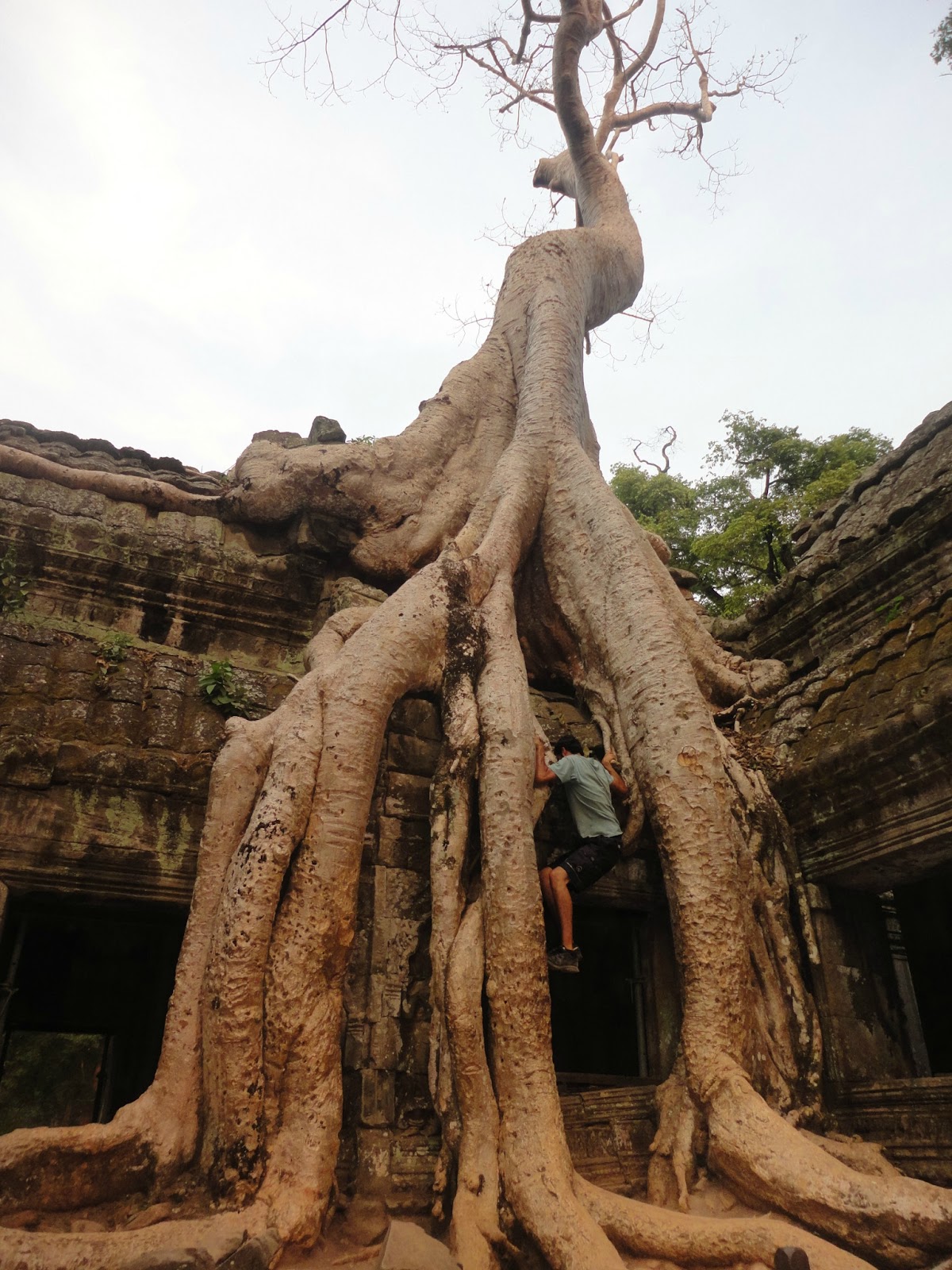 Which Is The Best Balance Transfer Card and How They Save You hundreds of Dollars
April 20, 2018